Hotlomi massage is an exclusive body treatment developed by our founder Jenny Zhang (D.A.c.). Bask in warmth as heated oils and a hot paraffin pack glide over your body. The heat loosens up the muscles allowing for an all together more effective massage. The technician will use their forearms to move the energy along your meridian points. Designed to totally relieve body tension and muscle pain.

This technique combines Hawaii Lomi Lomi style alone with the Meridian Therapy, and is performed in a deeper format. The use of hot paraffin pack helps to relax muscles instantly, this allows technician perform a deep tissue massage while muscles are not tensed.

What is lomi lomi?
Lomi lomi is a Hawaiian massage, also known as the "loving hands" massage. This name helps to explain its principles - the massage works gently yet deeply into the muscles with continuous, flowing strokes, allowing the recipient to relax and give in to the nurturing touch
Lomi Lomi works from the belief that memories are not just stored in the brain and mind, but also in every cell of the human body. The long, continuous strokes of the massage are designed to help the body let go of its old patterns and behaviours, which can cause as many stresses and strains as muscle tension.
"Lomi lomi" translates to "rub rub" in Hawaiian, and reflects the broad, flowing strokes made with the therapist's fingers, thumbs, palms, arms and elbows. Macadamia, palm and coconut oils are usually used as moisturisers in lomi lomi massage, to keep the strokes smooth and to nourish the skin.

What is Meridian?The meridian (经络) is a concept central to traditional Chinese medical techniques such as acupuncture, and to martial arts such as tai chi and qigong. According to these practices, there are channels along which the energy or qi of the psychophysical system is considered to flow. Such techniques are said to achieve their effects by manipulation and, ideally, balancing of the energy running through a network of complex bodily patterns. There is no physically verifiable anatomical or histological basis for the existence of acupuncture points or meridians. 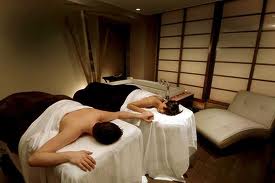